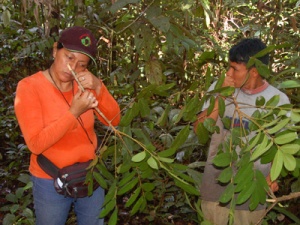 Rosewood tree in the Amazon pic via amazonecology.wordpress.com

I love this oil so much and have really enjoyed using it for many different things, but now I must adapt!

The Rosewood tree (Aniba roseaodora) is under threat and so the supply of this pure essential oil has been halted. Also known as Bois de Rose in perfumery, the last Rosewood oil I bought was actually from Canada and I think the Canadian company is a supplier rather than a grower as the climates are so very different. Most rosewood comes from Brazil and the government has been forced to protect this beautiful tree from poachers by enforcing strict laws. I’ve found a great article on Brazilian Rosewood from the Food and Agriculture Organistion of The United Nations –

The perceived threat to the species posed by the destructive nature of harvesting has led to increasingly tight controls on the industry in Brazil. Government regulations exist which are intended to minimise this threat although there are difficulties in enforcing them. The results of recent field surveys in Brazil by Faculdade de Ciências Agrárias do Pará (FCAP) based in Belem indicate, in fact, that the species is not presently faced with extinction. Substantial wild stands exist deep within forest areas which are unlikely to be exploited for logistical or economic reasons.

However, the older, more accessible areas which have been utilised by the rosewood oil industry are effectively devoid of mature trees and there is no significant natural regeneration. This, together with the general problem of deforestation caused by land clearance, has led to a loss of germplasm diversity and a narrowing of the genetic base on which future domestication of the species will depend.

A few months ago I was making a large batch of an essential oil blend I designed for a customer many years ago. I ordered my oils only to find out I was no longer able to get rosewood oil as it’s back on the endangered list. Not good. Not good for the people from the rainforest, the tree itself and the people who love this oil.

So what can are the alternatives to this oil? Many trusted suppliers are now offering a ‘blended Rosewood oil” and here’s a quote from one of mine –

Rosewood is a small evergreen tree now strictly controlled as an endangered species by the Government of Brazil. Due to the ever-increasing controls that CITES has put on the harvesting of the Aniba rosaerodora tree, the amount of legal wood finding its way to oil distillers has significantly reduced to a point now where we have been unable to source a good affordable quality of Rosewood Oil on the international market. Therefore we now offer this natural blend which imitates the components and scent of the real Rosewood Oil.

I have bought and tried this oil and the scent is basically the same as Rosewood – you really wouldn’t be able to tell the difference. However if you are using Rosewood for the therapeutic properties which most therapists would be, then it will not have the same effects on the skin and it is not the same. This is where the Canadian supplier comes in I think – they have created a blended oil from their own supplies of the real thing.

So let us pray that some genius out there with a trillion dollars to spare can start a sustainable rosewood farm so we can all experience, once again, the medicine this beautiful tree has to offer us.

We must listen to the earth and allow plants to thrive – after all we are relying on them to sustain us too! And we need to support the indigenous population of the Amazon who rely on their forest to live!

2 thoughts on “Rosewood – A Story of Ecology and Conservation”