Have you ever wondered if these plants (and essential oils) are the same? The one thing they have in common is that they all have an aniseed-licorice scent about them, however they are all different plants and the essential oils are different too (if only slightly). Fennel tends to be the more used essential oil in Aromatherapy but I’m sure some therapists out there may prefer Anise. 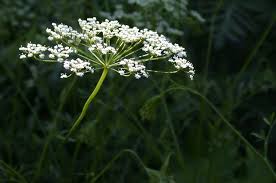 Pimpinella anisum comes from the Umbellifrae (also called Apiacae) family, like fennel. It is very similar to fennel in its scent and has some similar molecules. The plant is also very similar to fennel too – with the flowers making “umbrels” in their innate design (hence the “Umbellifrae’ family). Fennel has more yellow flowers and aniseed flowers are white. The stories of aniseed and fennel both go back to ancient Rome and I love this quote from Botanical.com:

“Mustacae, a spiced cake of the Romans introduced at the end of a rich meal, to prevent indigestion, consisted of meal, with Anise, Cummin and other aromatics. Such a cake was sometimes brought in at the end of a marriage feast, and is, perhaps, the origin of our spiced wedding cake.”

It is high in anethole which represents the highly distinctive scent, and Salvatore Battaglia reports the typical analysis as:

Even throughout history this seed has been used for coughs, colds, digestive disorders and it’s used for the same thing today. It is said to a better expectorant than fennel too.

Foeniculum vulgare essential oil comes from the seeds like the anise bush and as you can see they are very similar plants. One again the Romans used these seeds for digestion and the Greeks thought it a slimming herb because of its diuretic value. I definitely use fennel to release excess water and also watery emotions in my clients. I often use fennel with juniper and use this combo in clay masks for cellulite too. It seems to be a softer more nurturing oil than aniseed as it is lower in trans anethole. Here’s a typcial analysis from Salvatore Battaglia’s great book “The Complete Guide to Aromatherapy”:

Fennel has slightly more uses as it can be used for cramps during menstruation and to help the flow of milk in lactating women. I use this oil energetically as a self nurturing oil as it’s warm and inviting scent can help you relax and release. 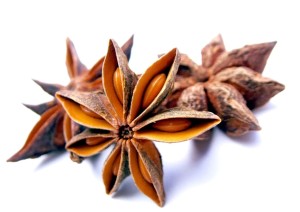 Illicium anisatum is part of the Schisandraceae family and you can see the little seeds within the star formations. Sometimes known as Japanese anise it is often mixed up with Chinese anise (Illicum verum) which is very similar. One of my suppliers offers Illicum verum var. Hooker only but I haven’t used it. In my practice I need to be able to use more commonly trialled and investigated oils and that’s why fennel is the best out of the three. Of course in perfumery it’s a different story as you would primarily selecting oils for their scent rather than therapeutic value. The closest I can find in a typical analysis is from “THE ESSENTIAL OIL OF ILLICIUM ANISATUM LINN. by W. B. Cook, A. S. Howard” and they state:

and a sesquiterpene hydrocarbon of unknown constitution (7.2%) and they say

“The composition of this oil differs widely from that of the commercially used star anise oil obtained from Illicium verum Hooker. The most striking difference between the two oils is found in the anethole content, which constitutes 88% of the commercial oil but only 1.2% of the oil here investigated.”

So there you go.

Basically if you are going to use an aniseed scented oil go with fennel.