I was recently asked to contribute to an article called “Sandalwood Dreams” appearing as an 8 part series by perfume officiando and writer Jordan River.

It started with a surprise present in the post via my friend and perfume blogger Portia Turbo from Australian Perfume Junkies. I was happy to open the package to find a cute little bottle of sandalwood oil and a beautiful colour brochure, almost a book! This was a sample of Santalum album, commonly known as Indian sandalwood or Mysore sandalwood. The big difference is that this Indian Sandalwood is grown in Australia, from seeds obtained from India, and it packs a powerful punch. This oil is now being offered by one of my trusted suppliers and it’s more expensive than the Mysore sandalwood has ever been, however it’s now sustainable and offers the world a great solution to the previous shortage.

I appear in Part 7 which is titled “What Does It Smell Like?” that also asks other experts on the scent of Indian sandalwood grown in Australia. 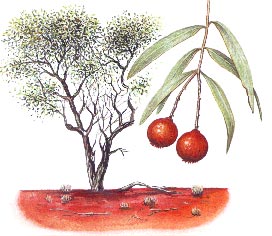 I have also previously written about the two types of sandalwood on Australian Perfume Junkies (so click here for the original story, with excerpts from the story below):

An essential oil from a wood can draw us in to world of intrigue and secrets, ancient knowledge and divine scent. Wood oils bring an oil formulation together and can be considered “grounding” and “centering” – due to the fact the tree roots delve deep into the earth. Oils from woods have been used for thousands of years in sacred ceremonies, embalming techniques and in traditional healing. Cherish these beautiful gifts from nature.

Today most oils come from renewable plantations but in the case of Sandalwood we have seen a decline in the tree population for many years. Indian Sandalwood has been over farmed, which has led to a crisis in the industry and in our forests. Illegal felling of young trees has also led to more stringent controls from the Indian government to help sustain production long-term. This is the one driving factor in the huge price increase in the last 10 years, and is also the reason why the Australian Sandalwood industry is booming.

The Indian type “Santalum album”, and the Australian sandalwood “Santalum spicatum” have similarities but are wonderful in their differences. The Indian wood is the classic deep, sweet exotic scent that we have come to know and love and in the Australian oil, you can actually smell the bush. It really is beautiful. I use both oils, and both are considered to be premium oils and are more expensive than common oils.

Traditionally Sandalwood has been used for spiritual ceremonies and the spread of the use of this oil is claimed to have come hand-in-hand with Buddhism. If anyone has been to India you would know the widespread use of the scent in incense and temples, in soaps and perfumes.
It is used therapeutically to treat acne, urinary disorders and infections and as a nervine tonic to ease stress and anxiety.

Sandalwood and oil – pic via http://www.fengshuidana.com

There is also an oil produced called West Indian Sandalwood but this tree comes from a different species and is sometimes called amyris oil. I’ve never used this oil, and have never seen it anywhere. It apparently has a slight sandalwood scent (hence it’s name) and is used in perfumes and fragrant body products.

Sandalwood is an oil for softening the edges in your life. Breathe it in and you wont be disappointed.

2 thoughts on “Sandalwood from India to Australia”