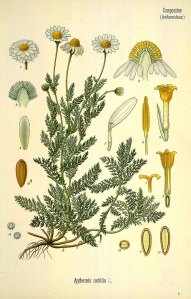 I have brushed over the chamomiles previously but would love to go into more detail about Roman chamomile. You can check out my previous blog Softly and Gently with the Chamomiles, but lets go into the world of this special, petit fluer in this article.

As with many plants this chamomile has a couple of botanical names – Anthemis nobilis or Chamaemelum nobile. Either way you can pick up that it is considered a nobile plant – distinguished by rank and manner. It is part of the Asteracae family (daisies) and the genus Chamaemelum. I’ve always loved daisies because they are so sweet, simple and pretty. This chamomile also has a very pretty scent and the essential oil is magnificent! For a small flower the scent is BIG!

This scent greatly differs from the other chamomile used in Aromatherapy – German chamomile – which is much darker in colour, darker and heavier in scent too. Our beautiful little “Roman” daisy will appeal to everyone from kids to the elderly, and even our pets. 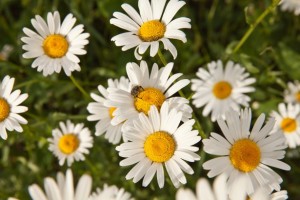 It’s hard to tell the chamomiles apart as a flower but the German chamomile tends to have a more prominent pointed centre with leaves pointing downward, whereas the Roman chamomile flower is generally more balanced and larger, with a flat centre and daisy-like leaves. This is a generalisation and I’m sure the gardeners out there will have something to say about that!

* for stomach cramps as it is a great anti-spasmodic

* as a stomach calming oil in general

* as a calming oil in all respects – both physically and mentally

* as a soothing tonic to overwrought emotions

* as a calming oil for children

* for any kind of cramping whether it be in the body, the emotions, the mind or the energetic body

* in body oil blends and treatments for red, inflamed skin

I find it difficult to describe scent but I would say that this oil is sweet and intoxicating, with honey-like tones. This is a description from Wikipedia –

“The word chamomile, and the genus name Chamaemelum come from the Greek χαμαίμηλον (chamaimēlon), “earth-apple”, from χαμαί (chamai), “on the ground” + μήλον (mēlon), “apple”, so-called because of the apple-like scent of the plant. “

I suppose it has an apple-like scent but at least this gives you an idea and also indicates how long this plant has been around.

“Chamomile was known to the Romans and used for incense and in beverages. Ironically, the name ‘Roman Chamomile’ by which it is sometimes known, does not stem from this time, but from a rather arbitary naming of the herb in the 19th century by a plant collector who happened to find some growing in the Colleseum in Rome!”

This site also refers to the use of chamomile in Egypt for treatment of fever but as we know it was various monasteries throughout Europe who consolidated the use of many herbs in the Middle Ages and who’s recipes still exist today in alcoholic beverages and perfumes.

Stay tuned for some recipes with this stunning essential oil which is more commonly retailed in a 3% blend in jojoba. This way we can use it straight from the bottle and it makes a wonderful perfume on it’s own. Fore more info on 3% blends check out my story here.