What a pretty flower! I always loved daisies as a child, and the chamomiles belong to this species called Asteraceae or Compositae. Chamomile is famous for it’s soothing nature and tranquil effects, and is used in both herbal medicine and aromatherapy alike. I’ve always thought of Aromatherapy as a specialist part of herbal medicine, powerful because it insists we use our sense of smell for healing and interacting with the world.

This chamomile has a sweet honey like aroma, and appeals to many people because of this softness. Roman chamomile is usually found in a 3% jojoba blend because of its price. It is often overlooked in favour of German chamomile but please give it a try. It is one of those oils that gives an immediate reaction of bliss.

In aromatherapy Roman chamomile is the one used as an anti-spasmodic treatment, an tonic for unclenching, that may also help the smooth muscle of the gut relax. Also great for muscle spasm and tension and general fatigue and stress.

Best of all, I like to use Roman chamomile as a perfume straight from the bottle. No doubt people will be attracted to you when you wear this oil as you will smell divine and will be radiating a sense of calm and knowingness. Try these recipes

“Floatin’ on a Cloud”

For release of gripping tension and pain in the body make an oil blend with 3 teaspoons of carrier oil and add: 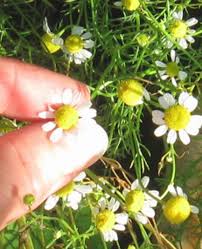 This tiny little flower is a different genus to Roman chamomile and what sets it apart from most oils is its blue colour. During the distillation process, one of the consituents – chamazulene – is changed to give a deep blue hue to the oil. This oil is best used as an anti-inflammatory and works well with lavender in this sense. It is great for stress, anxiety, and any tension in the body. It is a strongly scented herbaceous oil and I would not say this is an oil to use as a perfume. Think BLUE – think COOLING! A good oil for joints and muscles as well as an over thinking mind. German chamomile is more readily found then Roman chamomile and will also be in a 3% jojoba blend. Try these remedies:

For a treatment of painful joints make an oil blend with 3 teaspoons of carrier oil, rub over the joint and cover with a bandage. Rest. Add these essential oils to create your treatment:

After a stressful day stop your mind from over-processing by mixing the following into a little container and rubbing on your temples and third eye. Remember to put a little of the oil residue inside your nose to gain maximum benefit, and dilute with a few drops of carrier oil.

The chamomiles are your ancient tool for stress release.

Remember to use your intention when you make your blends to give extra power and personality to the formula.  For more information on intention see my article What Do I Mean when I Say “Use Your Intention”?

2 thoughts on “Softly and Gently with the Chamomiles”